Posted on March 3, 2015 by Mike Pihlman Leave a comment

A few years ago, I wrote about a technological paradigm shift in the home from a wired network with desktop personal computers, to a wireless, distributed, network connecting multiple laptop computers.

It is now 2015, and another dramatic paradigm shift is underway.  Toward a completely mobile, smartphone (or other) environment.

To catch you up on my thinking, here is how our technology (for remote work) has changed in the past few years….

In the “old” days, we connected our one large desktop computer (a Dell) in the study to the Internet via an 8 port switch to the router supplied to us, at the time, by AT&T.

The desktop was shared by all three of us.

I wrote my original paradigm shift blog in 2010.  At that time, we moved the router (now Comcast) and Internet connection to the Family Room (and yes the HDTV is in the picture, I am just leaving it out here to simplify the diagrams). 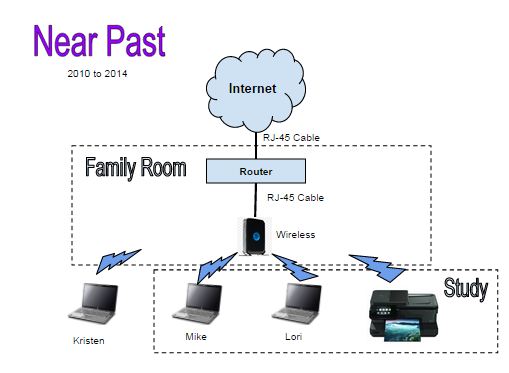 Lori and I both plopped our laptops on tables in the Study and Kristen wandered around with hers (Family Room, Living Room, Bedroom, etc).  We use the laptops exclusively and the Dell is now in the garage.

The proliferation of smartphones, tablets, etc. changed our landscape a bit.

In the past year or so, I have had increasingly capable smartphones and started to use them more heavily for reading email, hitting Facebook and LinkedIN, reading the news, and playing games (Robo Defense!!!!). Lori has an iPad which she uses most of the time looking up stuff on the Internet.  Kristen is Snap Chatting her face all the time from her iPhone.

The importance of the laptops is fading, Lori’s the fastest, mine next, and, because Kristen has now graduated from the University of the Pacific and has a JOB, the least. 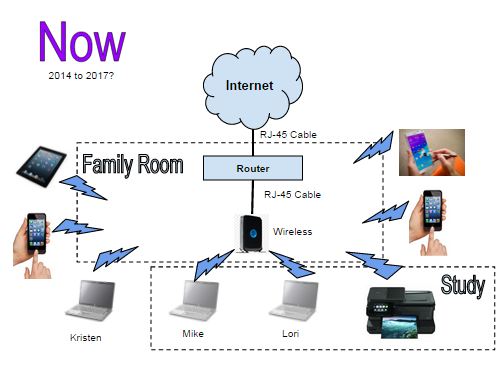 I see this architecture lasting a few more years….there are still many things I just can’t do on my Galaxy Note 4 that I can do on the laptop. But, technology moves on…..

Some of the stuff keeping me on the laptop (writing these blogs, making business cards, making these drawings, using a spreadsheet, etc) may be easier on the smartphone after 2017, but, maybe not.  It is possible the laptop (or Chromebook, or similar larger screened mouse controlled device) will still be necessary…I can’t foretell the future (as much as I would take advantage of that…if I could). 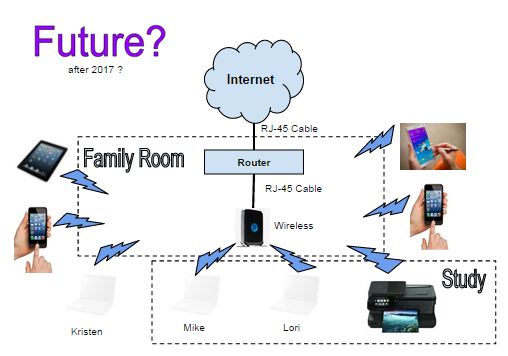 It is possible that: The laptop as we know it in 2015 will almost not be needed, the printer is always needed (maybe replaced with a 3D printer that can also make dinner), and our smartphones (or whatever mobile thingy) will be our main computing device.

I won’t look any further into the future since I probably won’t be around to see the brain implant that allows you to print an image in your memory then send it to selected friends, also in memory, and do all that a laptop and smartphone can do now, just by thinking.

Technology marches forward.  If you can’t adapt, you lose.

RIP Leonard Nimoy, Mr. Spock….I, for one, will miss you dearly.

Lets Have an Adventure