STEM: A Short Video Showing How One Family Lived with the Sony Aibo Robot Dog for a Week

The folks at CNET spent some time living with the Sony Aibo Robot Dog. How did it all work out? Watch this video to find out. Go here for a lot more information on Aibo. STEM (Science, Technology, Engineering, and Math) students can learn how to design robots […] 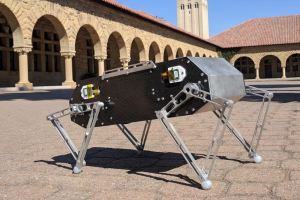 Check out this video on “Doggo” a four-legged robot built by STEM (science, technology, engineering, math) students at Stanford University. Go here to learn a lot more about the Doggo project including how YOU can get involved in this open source project. Geek On!

Scanning the news a few days ago, I spotted an article showing a picture of the Amazon Scout autonomous delivery robot. As always, in this day and age, I just read the headline and moved on to the next headline. But today, I went back to that article […] 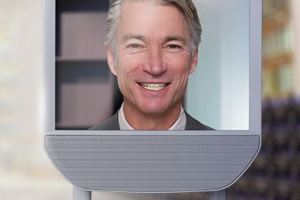 I started seeing robotic video conferencing devices appear around 2010. I wrote a few blogs on the HeadThere Giraffe, AnyBots, and VGo  (see my blog entries here) and even watched an episode of “The Big Bang Theory” which featured Sheldon using a “nice virtual presence device” to meet the […]

Here is another robotic video conferencing device.  VGo. In the video they call it: “Robotic Telepresence”…how errrr, interesting.  Gotta love those Marketing folks…gettin’ the buzz words down.  🙂 I will try to get the VGo at AltamontCowork to test (the others (Giraffe, and AnyBots, have failed to […]

If you watched the “The Big Bang Theory” last night you saw a really cool application for videoconferencing.  Do a search on “HeadThere Giraffe” (I’m serious) in this blog to see a very similar (and nicer) implementation (I copied the picture above). I was watching the show but was called away (by Lori!) to do […]

I wrote a blog entry a couple of years ago on a robot that could do videoconferencing.  See this link.  I never heard anything more… Here is newer product (Anybots) that is, I believe, getting close to release. Just thought you might like it…..I still think the idea […]

Blaze and TracyReaderDad.com are now reading "The Redeemer" by Jo Nesbo. This is a Harry Hole mystery / thriller. 📚📚📚😀
A man and his faithful companion. 😀
Pete is looking good this early morning. Spring is coming (you can tell by his feathers), we might even see the 🌞 today. 😀🚶‍♂️🚶‍♂️
I don't do this very often, but, this is Carol (and Kristen and Ryan) at their Tracy High graduation in 2010 just a few months before we lost Carol. 😢😢😢 Drive Safe! ForCarol.org