Blue Jeans Network Grows By 50% in One Quarter

Posted on October 5, 2012 by Mike Pihlman Leave a comment 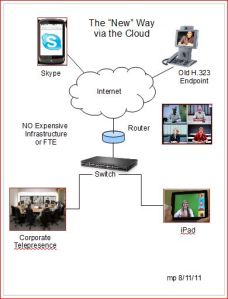 I have said this before (like starting in 1999, for those who don’t know that ESnet Collaboration developed one of, if not the, first IP-based cloud video conferencing services in the world)…..BUT….

Read this upcoming (Monday) press release from our friends at Blue Jeans Network.  Yes…I posted this WITH PERMISSION!

Wainhouse?  Who are they?  haha

Earlier this year, Blue Jeans rolled out new pricing plans that gave customers the opportunity to experience business grade multi-way videoconferencing in the cloud, without the high cost of entry and interoperability constraints of traditional on-premise bridging hardware (commonly known as multipoint control units, or MCUs).

Additionally, Blue Jeans expanded the addressable market to more than 2.3 billion people who have access to a Web browser.  In Q2 of this year, Blue Jeans became the first and only service allowing anyone with a browser and camera to join video meetings with other participants who could be using any combination of room-based videoconferencing systems (i.e. Polycom, Cisco, LifeSize, Sony, etc.), as well as Skype, Google, Microsoft Lync or audio connections.

Since rolling out these offerings, Blue Jeans’ business has exploded to the point the company has grown by 50 percent in just over one quarter.  Furthermore, Blue Jeans customers have saved an estimated $15 million by avoiding the MCU infrastructure market altogether by taking advantage of the new subscription-based “virtual ports” pricing plans in the cloud.

According to Wainhouse Research, the video conferencing infrastructure market currently represents a yearly market of approximately $700M and is dominated by Cisco and Polycom.

The browser access option has allowed participants to connect to a Blue Jeans meeting with nothing more than their Chrome, Firefox, Internet Explorer, or Safari browser and a camera.  The adoption has been phenomenal.  In just a few months, Web browser-based video conferencing has surged to comprise 25 percent of all endpoints in Blue Jeans video calls.

“Video conferencing has traditionally been expensive to purchase, difficult to deploy and complicated to use.  By being first with an interoperable MCU in the cloud offering and a WebRTC based browser option, we have clearly hit a nerve in the industry and tapped in to an unmet need,” said Krish Ramakrishnan, CEO of Blue Jeans Network.  “Our surge in demand is a testament to the growing business appetite for both videoconferencing and an infinitely scalable, cloud-based alternative to the traditional MCU.”

More information on Web Browser access is available at http://bluejeans.com/works-with/browser

About Blue Jeans Network
At Blue Jeans Network, our mission is to make video communications as easy and pervasive as audio communications, enabling more effective collaboration at work, at home, and on the road.  Our cloud-based conferencing service makes this possible by enabling customers to connect with each other seamlessly any time, anywhere, and from practically any device. The Blue Jeans Network extends high quality video communications beyond the traditional boundaries of specialized conference rooms and into the mainstream, allowing individuals and employees throughout an enterprise to interact more effectively with each other, and with their customers, partners, suppliers, family, and friends.  Blue Jeans Network is a private company headquartered in Mountain View, California.  For more information go to: http://bluejeans.com or follow the company @BlueJeansNet

A wet Blaze is a happy Blaze. 🤣🤣
On our ride-about a few days ago, I dropped a book for #literacy at the Library. 😃📚. ForCarol.org Drive Safe!
Our weekly ride-about took us past @workvine209, the SECOND coworking location in Tracy.
Blaze and TracyReaderDad.com are now reading "The Emperor's Tomb" by Steve Berry. Cotton Malone returns! 😃📚